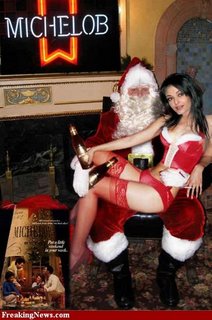 When I woke up this morning around 0400 I was feelin' pretty good - then I switched on HBO and watched Unknown Soldier.

The intimate portrait of a family's suffering through the loss of a loved one in Viet Nam left me, well, very sad, because I know that there is nothing anyone can do for the "Other Casualties of War". Young John Hulmes documentary of his search to know his Father made such an impression on me that I had to post on it. That post is right below this one.

When I completed my post and my second cup of Joe I made my usual morning rounds of the Blogosphere, beginning with Any Which Way where I read about the stupid Kris-gin Konservatives blathering on about a "War On Christmas". It occurred to me that the word "war" is too often used to mean something totally different, like a philosophical difference or an athletic event. I had to wonder just how many of these "Kris-gin Sojers" had ever really seen "war", or even served in the Armed Forces, for that matter.

Next up was my pal Bulldog.

Whew! PTSD and how it is affecting his own brothers! The cloud over my head darkened.

At this point the "cloud" was a roiling thunderhead. The anger inside me was reaching the boiling point and I almost went for a triple Johnnie Black, just to settle me down. Instead, I sparked up a bowl, closed my eyes and found a small quiet spot inside me where I know I am safe from myself.

Unable to even comment, I figgered I'd just check my site stats and then bag it for a while, go for a walk with my dog, enjoy a beautiful Sunday morning before the Eagles/Giants football game this afterrnoon.

It was there that I saw that Technobabe had visited and I clicked on the link to her site, Technobabe's Adventures, and found this post, "Shopping At Sears".

That brought me around. I suddenly realized that there were folks who did really give a shit. That hope was not lost. That, to some, "Support Our Troops" really does mean more than a magnetic ribbon. Once again I could feel the warmth of the sun. The storm had passed.

So do yourself two little favors this morning.

And shop at Sears.

I'm going for a walk with my dog.

Merry Christmas! May Santa bring you gifts and glad tidings!

To defend the Constitution of the United States of America, against ALL enemies, foreign and domestic...

This is an impressive crowd: The Have's and Have-more's. Some people call you the elites. I call you my base.
- George W. Bush

Who links to me

Who links to me?

The Doctor is in!

Suit Up or Shut Up!

deuddersun's Film & Television Credits (Not in order and not all listed)